Native vs. Cross-Platform Apps: Why it Matters for Your Digital Strategy 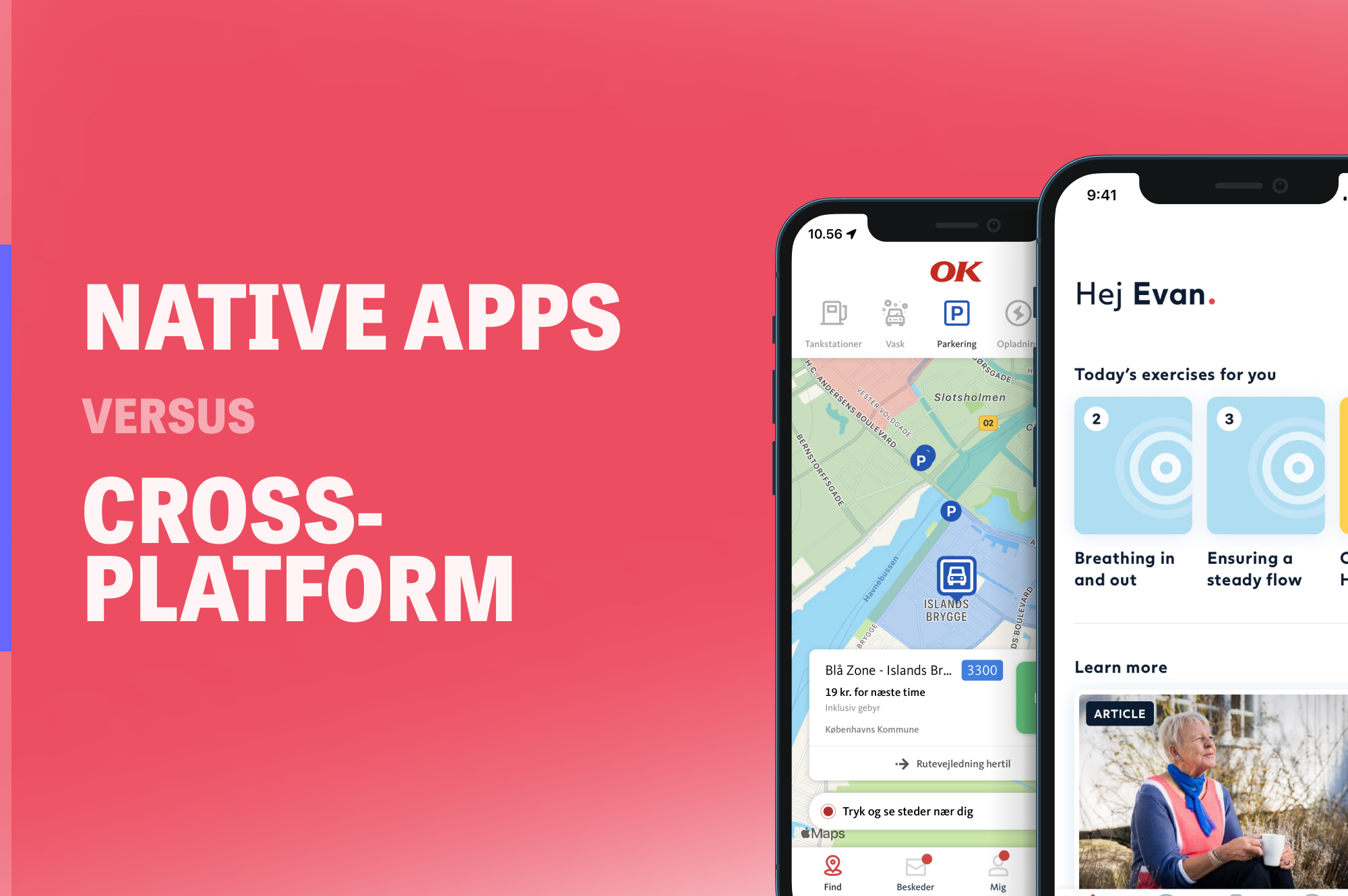 After numerous strategic meetings and careful considerations, you’ve finally arrived at the decision: Your business needs an app. However, if you wish to ace your digital strategy with your new application, another careful decision is yet to be made; namely, should you build native or cross-platform apps?

After numerous strategic meetings and careful considerations, you’ve finally arrived at the decision: Your business needs an app. However, if you wish to ace your digital strategy with your new application, another careful decision is yet to be made; namely, should you build native or cross-platform apps?

Whatever technology you choose to build your app on greatly impacts your product in various aspects: both user experience, the app's feature set, performance and your budget are affected by this choice – not only in the short-term, but in the long-term too.

In the following, we dive deep into both native and cross-platform apps, presenting the pros and cons of each developmental approach and why it greatly affects your strategic outcome.

But first, what are native apps?

A native mobile app is an app built for a particular mobile operating system such as iOS or Android. Native apps are built upon the same programming language as the smartphone’s operating system and follow the same behavioral principles.

The OS providers, Apple and Google, facilitate building native apps by offering developers their own development tools, interface elements and standardized software development kits (SDK). For Android, apps are primarily written in Kotlin, although Java has traditionally been used for native development as well. Likewise for iOS, apps are built using Apple’s own language, Swift, which is at the cornerstone of all Apple software, including iOS, MacOS and more.

Whether built for iOS or Android, these apps are called ‘native’ as they are innate to the very system they operate on. Building your apps natively yields great benefits, however imposes one significant limitation; that is, each app can only operate within the operating system it was built for.

If your business must make their digital offering available for both Android and iOS users, you must therefore manage two codebases, essentially building your app twice. Hence, an organization must invest more heavily in the development resources up front to be present on both platforms. However, while this may impose a higher cost in the short-run, this is often outweighed by a better product in the long-run, which will be elaborated further.

Cross-platforms apps differ from native apps by relying on third-party, open source user interface frameworks, such as React Native, Flutter, or Xamarin. This approach to apps is referred to as cross-platform, as the frameworks simply allow you to build one single application that functions across iOS and Android.

This introduces one primary benefit; only one codebase is needed, which saves you from hiring developers for each platform. In addition, a large amount of the codebases can often be re-used when customizing for each platform. For this reason, cross-platform development is said to be lower-cost with a shorter time-to-market than native apps. However, this often comes at the product quality’s expense, questioning whether cross-platform development truly is as cheap and convenient as marketed.

Why you should still build native apps

Despite the rapid emergence of cross-platform frameworks, native apps continue to be the predominant mobile development approach. Today, only 10% of free iOS apps and 25% of Android apps are non-native. Although native development has been around for longer, it is likely that native development will stay predominant due to the inherent advantages they offer.

Native mobile apps are created and optimized for a specific platform, which gives them the advantage of faster and more responsive processing compared to the cross-platform alternatives. Native apps leverage the platform's core programming languages and API’s, enabling frictionless communication between the application and the operating system. While everybody can agree that a slow app is a dealbreaker, this is, in truth, a matter of seconds. As such, for every second delay in a mobile page load, Google estimates that conversions fall by up to 20%, making speed performance imperative to not only your users, but also your business.

As native apps communicate directly with the operating system’s APIs, the lines of code are often reduced compared to cross-platform apps that, in contrast, must ensure compatibility of a wide range of programming languages. As a result, native development is often associated with fewer bugs and more stable performance, as native apps need fewer integrations, thereby reducing the risk of faulty code.

As a general trend, native apps are often considered more secure than cross-platform apps. This is partly due to the fact that native apps can access pre-built security features that are designed for the operating system. Conversely, cross-platform apps are built using web frameworks, which make them more vulnerable to attacks.

What is more, native apps can directly access the device’s hardware such as microphone, camera, GPS etc., and are not reliant on a third-party support tool to facilitate access. This results in faster execution and a more efficient use of the device’s hardware. As such, app developers are able to offer a wide range of functionality by seamlessly leveraging the phone’s capabilities. For the user, this translates to a richer and more natural user experience, as all of the device’s features can be accessed without friction.

This also ties to the design of the app, for which native app developers can easily access the operating systems interface elements and motion graphics. Consequently, it is possible to build aesthetically-pleasing apps that match the operating system in look and feel with minimal effort. The result is an overall smoother and satisfying experience, which have shown to have several derivative positive effects in the form of lower customer acquisition costs, increased user retention and increased market shares.

Taken together, a native app may allow you to offer users a better experience and a greater, more secure performance. By leveraging the full potential of your phone’s features, you may deliver a rich experience while also strengthening your business’ value proposition through your app. Ultimately, this may yield higher conversion rates and customer loyalty, in which the investment in native development will quickly deem itself worth it.

The compromise of cross-platform apps

Conversely, what makes native apps great are also what makes cross-platform apps suboptimal; the single-source solution essentially presents a compromise between two platforms, making them optimized for neither.

This introduces a need for customization to provide a similar-to-native experience that, despite being functional, often fails to deliver an experience to the standards of a native app. The overall experience tends to be slower, as more code must in general be processed in order to execute a function.

Occasionally, the goal to provide an almost-native experience may introduce such heavy customization that the codebase becomes ramified into two, nearly separate codebases.
At that state, the initial advantage of a single-source solution is lost, and cross-platform apps may impose a maintenance liability as costly as were the apps built natively from the beginning.

Although this may be managed in the short-term, a business who places their app at the core of their service may find themselves struggling to optimize their app performance in the long run, as open-source frameworks may add complexity to the code that increases with time. Moreover, cross-platform development requires maintenance of third-party libraries that must be updated regularly, which introduces additional liabilities and thereby higher total cost of ownership compared to native development. Consequently, this may prevent businesses from obtaining their strategic objectives of scaling while providing a satisfactory product quality in a long-term perspective.

For the same reason, examples of major companies transitioning to native development are multiplying. As of late, the project management software company, Notion, announced they obtained increased performance metrics by converting parts of their app into native components, allowing them to run twice as fast on iOS and three times as fast on Android. The decision to transition to native development came after long periods of heavy criticism from its users.

The changing hearts of the cross-platform community

However, as with most open-source software, the continuation and advancement of these are dependent on the interest of developers. This may impose a long-term risk for your cross-platform app, as your technology may quickly become outdated with the decreased popularity of the chosen framework.

As an example, open source framework Xamarin's popularity has been steadily decreasing over the past 5 years, while React Native and Flutter’s popularity has been repeatedly peaking and subsetting. The volatility of a framework's traction is notable, questioning when, if ever, your app will require a technology change.

Ultimately, this may force you to re-establish parts or wholes of your app in an alternative programming language, making the initially cheap solution a costly endeavor.

In the end, examples of both good and bad native and cross-platform apps exist. Yet, the drawbacks of cross-platform frameworks should encourage you to think twice about what technology best empowers your strategic objectives; if costs are a strict limitation, and your app need only offer a quick, simple solution, cross-platform development might be the right choice.

However, if your application is at the essence of your business, it is our take that a cross-platform approach may quickly deem itself insufficient. In that case, native development will save you time and money in the long run, while also increasing the chances of greater conversions and customer loyalty. Creating a Total Mobile Experience
11 Aug 2021 We’re no strangers to apps. The average person has at least 40 different apps stored on their smartphone with multiple different uses and purposes from games and social media to streaming, dating and shopping. In many cases they make life or
Read more › Putting Data Privacy on the Agenda
19 Aug 2021 You’re sitting with your iPhone, and you decide to download a new app. When you open it, a pop-up jumps out at you, asking if you want to let Apple track your behaviour across different apps. What do you do?
Read more ›